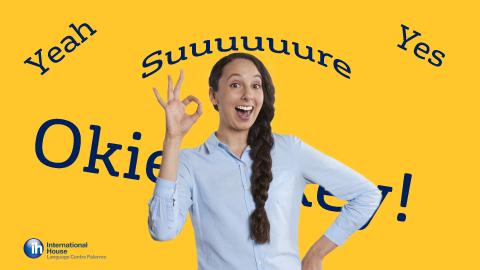 We’ve seen ways you can say ‘no’ like a native speaker, now let’s look at some ways you can say the other word... YES! ;-)
Luckily, saying yes is generally more of a happy experience, so this article should be a bit more enjoyable!

So let’s have a look at some of the different ways to say ‘yes’!

2 Sure thing
Another informal way to speak, but like the example above, it’s quite a nice and friendly term. It is used similar to something like ‘of course’.
Example: “Can you give me a lift to school” “Sure thing!”

3 Yep / Yup
Quite simple to understand this one! If you are too lazy to say ‘yes’, you can just say one of these which is a lot easier for the mouth! Like the previous 2 examples, obviously quite informal. It’s not necessary a ‘nice’ way to speak, but it’s also not

4 I’m in
A very nice way to yes to an invite, especially when the invite comes in a group form. The classic thing is when someone sends a group message on Facebook to many people asking if you want to go to a specific event, a very quick and easy (and nice) way to reply is simply “I’m in!”

5 Sounds good
Similar to the one above, it is used to say yes to an invite, however, it doesn’t express a lot of enthusiasm. This isn’t always the case though, if you don’t know someone very well or you don’t want to show a lot of enthusiasm (maybe you are hiding your excitement), then this is the perfect solution!

6 Aye
Pronounced in the say way as “eye”, this is extremely common in the North of England, Scotland and Ireland. Unlike most other words on this list, this one is a 100% direct substitute for the word ‘yes’!

7 Indeed
The most formal term on the list, but also a very charming way to say ‘yes’. It will often be followed by “I am”, for example “are you coming to the party tonight?” “indeed I am”. A tip for the men: using this is the perfect way to sound like an English gentleman!

8 By all means
A very friendly term, used to say yes to a request from someone. For example, if someone asks you if they can use your pen, you can respond “by all means”. Lovely stuff!

9 You betcha!
This should read “you bet you!”, but when said quickly it becomes “you betcha!”. It is an informal way to give a strong yes, like a few examples on the list, it is especially used to accept invites. For example, “are you coming to the party coming tomorrow?” “you betcha!”

10 I’d love to
Let’s save the nicest until last! The meaning is quite obvious, but notice how it finishes with a preposition. Obviously people normally say “I’d love to + verb”, but when using this expression to say yes, you can just say “I’d love to”.

So next time you have to say the word ‘yes’, you can add a bit more variety to your language. And remember.... variety is the spice of life! ;)

Blog tags
Ways to say ‘Yes’ like a Native Speaker