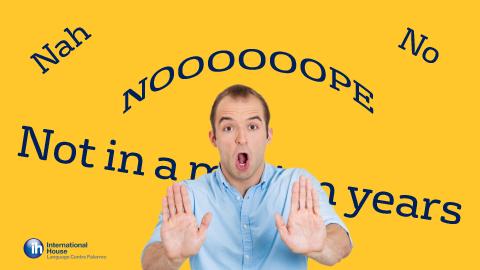 There are even ways in which British people say no which Americans don’t use!

So let’s have a look at some of the different ways to express this magical concept ‘no’!

1 Thanks but no thanks
This may sound polite, but it’s actually not! It’s usually used when people are a bit angry. A common example would be in a shop when someone is trying to sell something, at the point when you’ve had enough and don’t want to be asked anymore, you could respond “thanks, but no thanks” – then they will get the message!

2 no way, José!
This is used to say “absolutely not” when we are asked something ‘difficult’. That might not make sense, so let’s look at an example! “Do you want to clean my room?” “No way José!”. No-one knows why we use the name José, just because it rhymes with ‘way’ – it’s definitely not connected to José Mourinho!

3 No siree, Bob!
Identical in meaning and use to “no way, José!” and again, there is no explanation as to why we use ‘Bob’. Who even is Bob?! We’re not sure! However, we do know that it is a very funny expression to use; obviously it is informal so it should only be used with friends. Also, it’s not always necessary to add ‘Bob’, ‘no siree’ works in the same way!

5 I’ll give it a swerve
A very nice expression used to say no to invitations. For example, if someone asks you if you want to do to the pub after work, you can say “I think I’ll give it a swerve, I’m tired so I just want to go to bed”. It’s actually quite a friendly way to decline an invitation, but like most things on this list, it’s not a formal thing to say!

6 Could do
The funniest and most British thing on the list! We use this when someone asks you if you want to do something and it basically means “no, but I’m too polite to say no directly”. An example would be “shall we go to the cinema tonight?” “We could do”. It makes absolutely no sense, as it’s obvious “we could do”!

7 Nah
Probably the closest ‘translation’ of the list to the standard word ‘no’. It is extremely informal though and usually shows you are disinterested in the topic of conversation.

8 We regret to inform you...
Finally we have a formal expression! It is especially used for job applications when the company responds to you to say “no, you haven’t got the job”, but to make it more formal and to sound a bit better they usually write something like “we regret to inform you that you application has not been successful”.

9 I appreciate the offer but...
Another formal way to say no. Obviously we use this when we say no to an offer, but it just sounds a lot nice than “no” or “no thanks”.

10 Nope
Another very informal way of saying no, but it is quite funny when used with friends. It is used to respond to ‘yes’ or ‘no’ questions. A classic example would be “have you done the homework?” “Nope!”.

So next time you need to use the dreaded word ‘no’, at least you have a few more options!

Blog tags
ways to say ‘NO’ like a native speaker