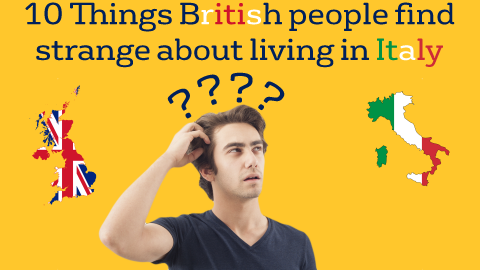 There are many things that people find strange between different cultures and there are many between British and Italian cultures.

Italians find it very strange that there are no bidets in the UK and that they eat pineapple on pizzas!

But what are some things that British people find strange living in Italy?

We asked our teachers to tell us and here are some of their comments – enjoy!

1 Colpo d’aria
“I just don’t understand what this is: a ‘hit of air’? I didn’t know that air could be so dangerous!”

3 Saying ‘bravo’ when you eat more
“Whenever I’ve been to an Italian lunch, there is obviously always a lot of food. Everyone always tries to encourage me to eat more and every time I decided to take more food, everyone always says ‘bravo, bravo’. I didn’t realise that eating was something to be congratulated for, I just thought it was a normal thing that everyone did, but obviously I was wrong!”

4 Men kissing each other to say hello and goodbye
“I was very shocked when I arrived to see men kissing each other 2 times to say hello and goodbye. I thought it was just something that you saw in films or something that old people did. When my male Italian friends were kissing me at the beginning, it was very strange, but I must say, I actually quite like it now!”

5 Two kisses to say hello and goodbye
This one is particularly informal but is very common among close friends. Obviously it is only used for small things, so if your friend lent you a CD and you give it back to him, instead of saying thanks, he might say ‘nice one’.

9 Why people stay outside when it’s cold
“I’m not sure if this is a problem just in Sicily where I live, but it seems strange to me that when people go out to drink in January and February, they stay outside. I understand when it’s hot, because staying indoors is often too hot. When I ask people why they stay outside to drink when it’s cold, they always say “it’s not cold like it is in London”, which is true, but in London we don’t stay outside all night! Also, even if it’s not really cold, if you are wearing a coat, scarf and hat, it means that it is definitely cold, so why don’t we just sit in a nice warm pub, have a drink and take our coats off? It sounds much better than standing on the street in the cold watching the cars go past!”

10 What time is ‘morning’ and what time is ‘afternoon’?
“In Britain we consider the morning to finish at midday, from then until 5pm – 6pm, then anything after that is evening. When my Italian friends say to me “let’s meet in the afternoon”, that for me is about 3pm, then they say “so let’s meet at 6.30pm, yea?”. That’s evening for me.... I go to bed a few hours after that!”

All of our teachers love living in Italy, so obviously these things can’t be so strange! :-)