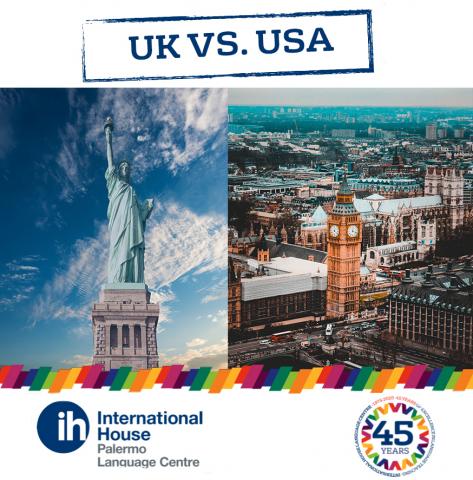 “What’s the difference between ‘sweets’ and ‘candy’?”

This is a common question in the English classroom, just like “what’s the difference between ‘chips’ and ‘fries’?” and many more.

The answer to that question is that there is NO difference in meaning, as they both mean the same thing, the difference is that one is American and one is British!

In this article we will see all of the main words which are different, have a look at one that you definitely DON’T want to get wrong and also one very IMPORTANT difference!

Do British people and American people understand each other?

Yes. There are many people that think that we have difficulty to understand each other, but that’s not true. A British person and an American person can have a conversation without any MAJOR problems.

Some of the words are different, so there are a always a few times you might hear the following:

Notice in the above example it was the American person not understanding, that is because Americans generally have more difficulty understanding British people than vice versa.

This is because British people watch a lot of American TV, so we understand

This also happens within countries though, if someone from London speaks to someone from Newcastle, there will be a few words different, but they will understand 99% of what the other person says. Just like with British people and Americans.

What words are different?

Before we look at the different WORDS, let’s look at words that are the same but have different SPELLING.

Obviously there are many, many other words that have differences in spelling, but many of the ones mentioned here show the spelling groups.

Here are a few of the groups:

Verbs that end in ‘ise’ in British English, finish in ‘ize’ in American English.

Words that end in ‘our’ in British English, end in ‘or’ in American English.

Nouns that end in ‘ence’ in British English, end in ‘ense’ in American English.

Which spelling style is ‘more correct’?

The answer to that question is neither. They are BOTH correct!

BUT... there is one thing you need to be careful of: you must be CONSISTENT!

This means that in your writing, if you use ‘color’ then ALL of the spelling in the document must be in the American style.

If you spell that word ‘colour’, then ALL of the spelling in the document must be in British style.

What words are different?

Again, there are many, so let’s have a look at the ‘main’ ones.

If you use any of these words with a British person, they will understand. There are SOME which an American might be a little bit confused about, but they will still understand what you are saying.

A word to be careful of is ‘pants’. In American English this means ‘trousers’ but in British English, it means ‘underwear’!

So be careful with that one! ;)