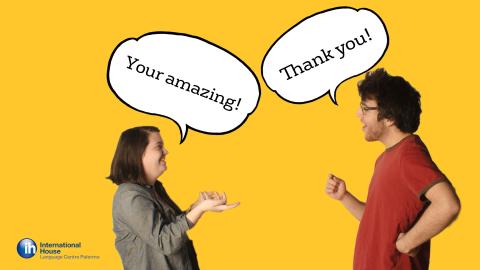 If you sometimes worry that you make many mistakes when speaking English, this article will make you feel a lot better about things! :) As it is not only English learners, that make mistakes, but also native speakers.
In this article we will have a look at some of the most common ones and you will be surprised to see how basic some of them are!

1. Your / You're
This is probably the MOST common error (which is why it’s at number 1 '^_^). As you will probably know, these words have the same pronunciation, which is where the problem lies. Obviously in speaking, the error doesn’t exist, but if you look at any conversations on Facebook between native speakers you will often see a sentence such as “hope your well”, whilst the correct sentence is obviously “I hope you are well” and therefore “hope you’re well”.

Very similar to this is the confusion with “there” “their” and “they’re”.

You may have heard your English teacher correct you for saying a sentence such as “I don’t understand nothing”, and rightly so, as it is an incorrect sentence; however, there are many native speakers who would make that exact error!

2. Lose / Loose
This MAY be the most common, it’ll certainly be a good match between this and number 1 to see which mistakes is made most! These are two different words that mean two COMPLETELY different things.

We have ‘to lose’ which is obviously a verb and the opposite of the verb ‘to win’, then we have the adjective ‘loose’ which means ‘not tight’. For example, “if you go for Sunday lunch at your grandmother’s house, wear loose trousers so you have space to eat everything!”

Make a note of this one and make sure you don’t loose it!

3. Went / Gone
‘Went’ is the past simple of the verb ‘to go’, whilst ‘gone’ is the past participle. So please finish off this sentence “I should have went / gone to the party”.

Which one did you choose? If you chose ‘I should have gone to the party’, then congratulations, you have avoided a mistake that many native speakers make!

4. The Apostrophe
There can be times where it is a little difficult to know when to use it, such as in the sentence “I have 10 years’ experience”, but you will often see native speakers write something like “I have 5 dog’s and they are great”. That is not difficult. That is just wrong.

5. “What did yous do last night?”
To be fair, most people know this one is incorrect (we hope)! As there is no plural version of ‘you’ in English, you will often hear native speakers invent their own version of it as just add an ‘s’ on the end of the word... but make sure yous don’t do it!

6. The Word ‘Literally’
This is one of the few of the list that is a common mistake in writing AND speaking. The word means ‘ exactly, without exaggeration’, but you will often hear someone say something like “I literally died when I saw him”. If you ‘literally died’, it means exactly that... you died.

This mistake is SO common, that there is a debate as to whether this incorrect meaning of adding emphasis should now be considered correct – and this is exactly how languages evolve!

7. Could of / Would of / Should of
Again, this one is EXTREMELY common. Native speakers get confused because they hear the common expressions “I could’ve done it” “I should’ve done it” and “I would’ve done it”, so they think the ‘ve part is ‘of’ as that’s what it sounds like.

As you know though, it’s not ‘of’, it’s the contracted version of ‘have’. They should have studied more at school! ;)

8. You was / they was
The verb ‘to be’ is usually taught in the first lesson of an English language course, yet there are many native speakers that have still not mastered it! You will often hear people saying (and writing) something like “they was loads of grammatical mistakes in his writing”. Oh yes, loads indeed.

9. Lie down / Lay down
This is also extremely common and most people don’t actually know which one is correct (like the writer of this article)! The verb ‘to lie down’ means to rest in the ‘horizontal position’ (usually done on the sofa watching TV or on a bed) and you will see that 99% of native speakers think the past of this verb is ‘lied down’ (which is incorrect) and will say “I lied down for an hour”.
The past of the verb is actually ‘lay down’ so it’s the correct version is “I lay down for an hour”.

A quick interesting fact for you: did you know that nearly all of the irregular verbs are the most commons ones in English (such as ‘went’, ‘did’, ‘had’, ‘wrote’, ‘read’ etc). If they weren’t, they wouldn’t be irregular, as native speakers would get them confused and just start adding ‘ed’ to the end of them.

For example, the past of the verb ‘to melt’ used to be ‘molt’, but as native speakers started (incorrectly) saying ‘melted’, it then became a regular verb... it’s that evolution of language we spoke about earlier!

10. “I et a sandwich for lunch yesterday”
Speaking of the incorrect past tenses of verbs.... here’s another one! This is a mistake that you will only come across verbally, where instead of saying the past of the verb ‘to eat’ as the correct form ‘ate’, people say ‘et’ – very strange!

There are some other incorrect past forms of verbs that native speakers use, such as ‘I brang my book to school, instead of ‘I brought my book to school’ and then sometimes people will just use the present to express the past and say something like “he give me his number”... English people are very strange sometimes!

So as you can see, you are not the only person to make grammatical mistakes in English, these mistakes exist in England as well!

So if your ever in their, make sure you don’t make none of them!