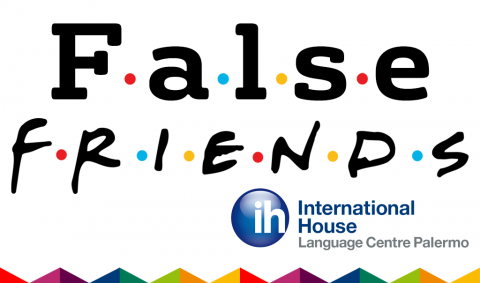 Learning a foreign language is always difficult, but it’s even MORE difficult when you see a word that looks THE SAME in your language but the meaning is DIFFFERENT.

These are called ‘false friends’ and there are many that exist between Italian and English. There are some ‘famous’ ones like ‘parenti’ which DOES NOT mean ‘parents’, it means ‘relatives’ – as I’m sure you know!

However, not ALL of these false friends are so well known. As an English teacher in Italy, I hear a lot of these mistakes EVERY DAY, so here is a list of words to help you to AVOID making the same mistakes!

1 'Attualmente' DOES NOT MEAN 'Actually'
When I meet new students I often ask them what their job is and very often I will hear a response like “I’m an architect, but actually I’m studying for an exam”. This doesn’t really make any sense in English, as the translation of ‘attualmente’ would be ‘currently’.

In English, ‘attualente’ means ‘in realta’.

2 'Educato' DOES NOT MEAN ‘educated’.
This one is a little bit more difficult, as ‘educated’ is a little similar to ‘educato’ but it is NOT the same! In English, if you are ‘educated’, this means that you went to a good school and university, but sometimes people that that are ‘educated’ do not have good manners and are therefore not ‘educati’.

The correct translation of ‘educato’ is ‘polite’.

3 'Pretendere' DOES NOT MEAN ‘pretend’.
This is definitely the MOST COMMON on the list! Not only that, but it is also the mistake that is made by ALL levels, from beginner to advanced. Unlike most of the examples on the list, these two words have COMPLETELY DIFFERENT meanings!
The translation of ‘pretendere’ in English is ‘to demand’, for example ‘I demand that you give me your homework!’.

However, the meaning of ‘pretend’ in English is ‘fare finta’… as I said… very different!

4 'Libreria' DOES NOT MEAN ‘library’.
This is probably one of the more known ones on the list, but it is surprising how many people still make this mistake. Very often students are able to correct themselves after saying this and say something like ‘I bought the book from the library… oh sorry I mean bookshop!’.

As you probably know, the translation of ‘library’ is ‘biblioteca’.

5 ‘Sensibile’ DOES NOT MEAN ‘sensible’.
Very similar to number 3, in that this is VERY COMMON and made by students from ALL levels. In English, ‘sensible’ means something similar to ‘practical’. We use it to describe people, especially children that are often mature and do not do stupid things, in this situation it is more connected to ‘responsible’.
However, we also use it to describe choices. For example, if you decide to study a new language and you are choosing between Spanish and Swedish, Spanish would probably be a more sensible choice as it is spoken in more countries. In this example it is similar to ‘practical’.

The meaning of ‘sensibile’ in English would be ‘sensitive’.

6 ‘Largo’ DOES NOT MEAN ‘large’.
Another very common one on the list. Many people do not even know the correct way to say ‘largo’ in English; however, don’t worry as I will tell you now!

The correct way to say it is ‘wide’, whilst if you say ‘large’ it means ‘grande’. Admittedly they are similar, but again, they are different. For example, a room can be wide, but that doesn’t necessarily mean it is ‘large’… and vice versa!

7 ‘Lettura’ DOES NOT MEAN ‘lecture’.
This one is less common, as the word ‘lecture’ is not so common in English. However, because of this, not many people know the actual meaning of ‘lecture’. In English, a lecture is usually an educational talk given to an audience; it is especially used for university. As you don’t go to lessons at university, you go to lectures!
We also use ‘lecture’ when someone gives you a long speech, usually used about parents. For example, “my mum gave me a long lecture about how I should keep my room tidy”.

The correct translation of ‘lettura’ in English is ‘a reading’.

8 ‘Finalmente’ DOES NOT MEAN ‘finally’
The meanings are similar, but like other examples, they are NOT the same – especially when used in an exclamation. When you say ‘finalmente!’ in Italian, we say ‘about time!’ in English.

The correct translation of ‘finally’ in Italian is ‘alla fine’.

9 ‘Discussione’ DOES NOT (always) MEAN ‘discussion’.
The meanings of these two words are SOMETIMES the same. However, in Italian you use this word to also mean ‘litigio’ or argument, whilst in English, as discussion is simply when you talk about a specific topic. For example, “during our English lessons we discussed politics”, this DOES NOT mean we had an argument about it, it just means we spoke about it and exchanges our opinions.

The correct translation of the word ‘discussione’ is ‘argument’ when used in this context.

10 ‘Confidenza’ DOES NOT (always) MEAN ‘confidence’.
Similar to the previous one, in one particular context, the meaning of these words is different. In English, it makes no sense if you say “I have a lot of confidence with my teacher”. When used in this context, there is no direct translation for the word ‘confidenza’, for example, using the same example as above, we would say “I have a good relationship with my teacher”.

Conclusion
Mistakes are a common part of learning a language and the best way to learn is to make as many mistakes as possible, so don’t worry if you do! However, hopefully this article will save you from making a few! ;)