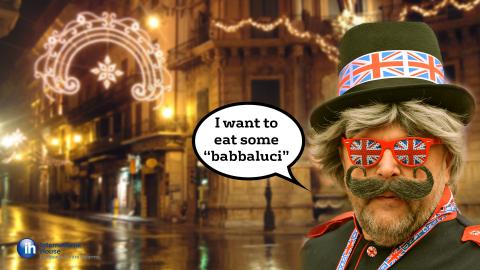 Then for the actual ‘little party’ (which I understand is the direct translation of ‘festino’.... even if it is the complete opposite of a ‘little party’!), my friend invited me to his house which is on the corner of Via Roma and Corso Vittorio Emanuele, so I stood on the balcony and watched the procession and all the floats pass.

I watched in amazement, as I had never seen anything like it before. I go every year to experience the feeling of the party, as it just brings a sense of belonging to the city. I am obviously not ‘Palermitano’, but attending this event makes me feel like I am little bit.

The sense of belonging that can be experienced at the event is something very strange for us English people, as we don’t have celebrations for patron saints of cities in England; in fact, as far as I know, we don’t even have patron saints for cities!

So I had never experienced a city coming together like that before. The closest thing I’d seen to it was in the Simpsons when they celebrate the day of Jebediah Springfield! Seeing and experiencing it in real life though, is an incredible experience.

It’s the same thing for the food. We don’t really have ‘typical food’ from different cities, so just by­ eating this particular food on this specific day, helps again to make you feel part of the city. I must admit, it took me a few years to build up the courage to eat some “babbaluci”, but a couple of years ago I finally did it and I actually quite liked it!

When I ate these “babbaluci” and when I have eaten other typical food my Palermitan friends always say “Bravo! Bravo!” which again gives me the sensation of being ‘one of them’.

One of my favourite moments of the celebration is when the major arrives at Quattro Canti on the float and shouts “Viva Palermo e viva Santa Rosalia” and hearing the big cheer. It reminds me of being at a football match and supporting a team, but in this situation, you are only supporting the city and its mere existence.

Over the years of living here, I’ve found out more things about the day. I know about the history of it now, but then I found out that most Palermitan people don’t know – so that’s always a good conversation when I recount the story behind the day to them! Although I still don’t know everything, every year someone tells me something new about the day that I didn’t know before, so I’m looking forward to what I’ll learn this year!

My advice to everyone, Palermitan or not, is to attend the event. If you are not from Palermo, then going to the party will give you a feel for what the city is about. And if you are from Palermo, it is a time to celebrate being so.